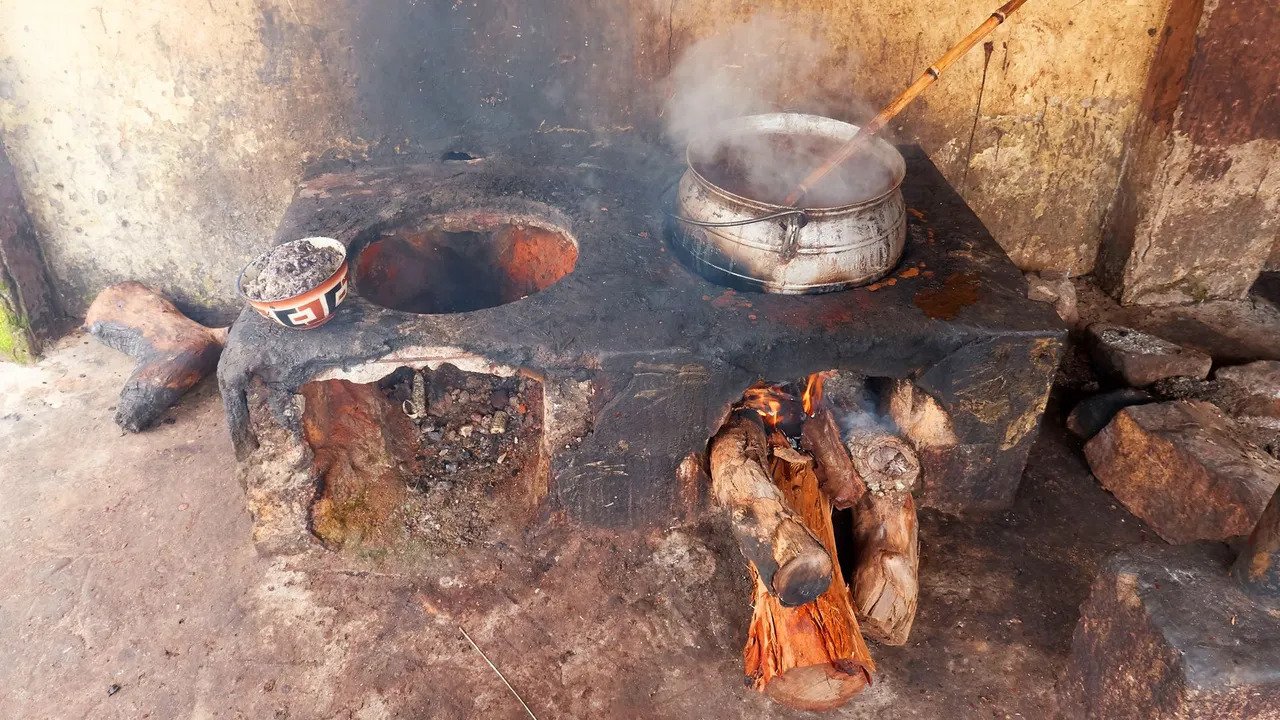 Catherine Chinenye's morning routine is one of early morning prayers and breakfast, before visiting her family's nearby cassava and yam farms in Umuekpe village, in south-east Nigeria. At the farms, she begins to tend the twisted tendrils of yam and blooming cassava stems.

From tim... to time, she adds bits of firewood to the heap in a corner of her farm. The firewood, she says, will serve for the sunset meal. Soon the fireplace will be lit, with a black pot resting on a hearth of three stones filled with smouldering charcoal and smoke.

Catherine shares this routine with 175 million Nigerians – more than the number of people living in the UK, France, Portugal and Belgium combined – who rely on wood, charcoal and other polluting varieties of biomass for fuel. Overall, nine in every 10 Nigerians lack access to clean cooking. On a global scale, the country comes only behind China and India in terms of the numbers of people living without access to clean cooking. 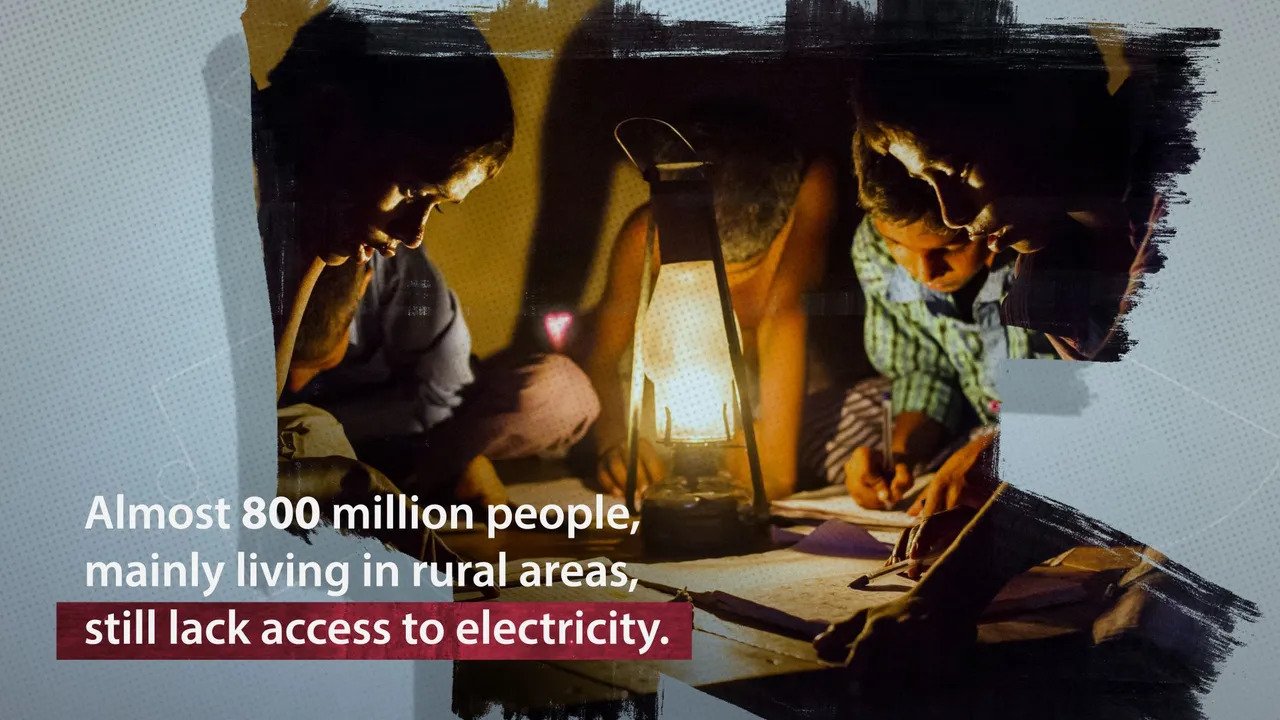 Around 10% of the world's population still does not have access to electricity (Source: World Bank, Credit: Adam Proctor/BBC)


Charcoal cooking is an age-long practise in rural communities in Nigeria, fed by the constant cutting of trees. In 2020, Nigeria lost 97,800 hectares (377 square miles) of natural forest, equivalent to 59.5 million tonnes of CO2 emissions.

The situation is also grim for health in the country. In 2016, more than 218,000 people died in Nigeria from household air pollution, including from inhaling smoke from open woodfires in the kitchen.

But more recently, the practice has also taken root in urban centres, says Adeola Ijeoma Eleri, chief scientific officer at the Energy Commission of Nigeria. She links this trend to a complex supply chain that starts with the "rampant and indiscriminate" cutting down of trees and the production of the charcoal in kilns close to cities. 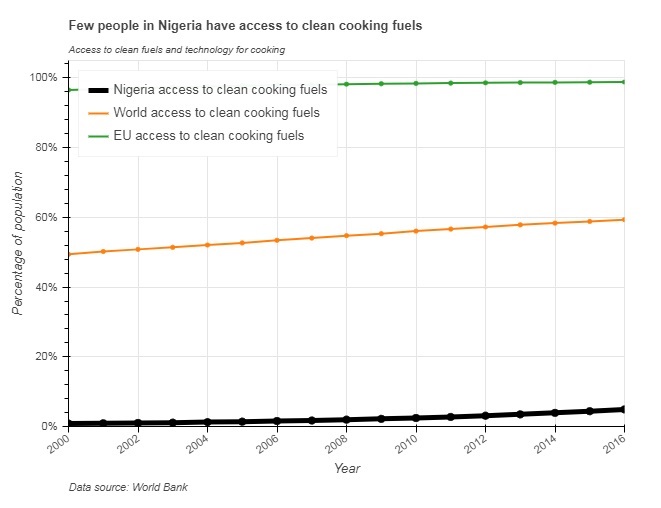 Nigeria is a relatively small climate polluter on a global scale, due to its limited industrial activity. Despite having Africa's largest economy and its largest population, equivalent to 2.7% of the world total, it contributes 0.36% of global CO2 emissions. However, the country's CO2 emissions almost quadrupled between 1990 and 2019, from 28 million tonnes of carbon dioxide per year to 92 million. Its emissions are expected to soar further with the ongoing population surge and economic growth.

This means Nigeria's path will be crucial in the drive towards global net-zero emissions in the next three decades – a goal the world needs to meet to limit global temperatures to 1.5C, according to the International Panel on Climate Change. At the UN's global climate talks in Glasgow, COP26, Nigeria made a pledge to reach net zero emissions by 2060. The country's leaders have also promised to cut emissions 20% by 2030 compared with business-as-usual levels, increasing to a 47% cut below business-as-usual by 2030, depending on whether the country receives international financial support.

The country's commitments on climate have earned it an "almost sufficient" score from analysts Climate Action Tracker (CAT), which notes that Nigeria faces one of the dilemmas of climate action. Despite its limited contribution to climate change in the past, it says, Nigeria will have to abstain from exploiting fossil fuel resources if the global 1.5C limit is to be kept. 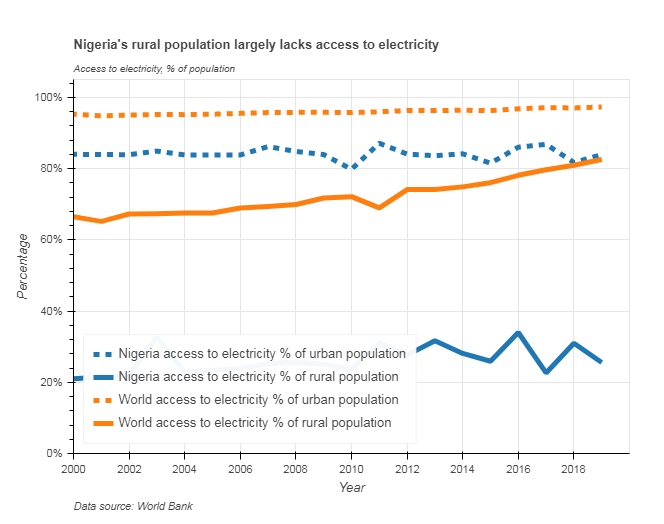 But Nigeria will also have to look closely at its usage of charcoal and firewood, and find ways to cut it. Biofuels accounted for 86% of CO2 emissions from energy use in 2017 in the country.

It could exploit less polluting cooking sources such as electricity, gas, ethanol, solar and high performing biomass stoves. But a long-held cultural preference for charcoal and firewood, and high costs of alternative fuels could hamstring progress. Sharon Ikeazor, Nigeria's minister of state for environment, has said that 60% or more of all households in Nigeria will still be cooking with traditional biomass by 2030 if current policies continue.

Such new actions are clearly needed. But fixing the situation will come at a cost. With four in 10 Nigerians living below $2 (£1.5) a day, families often do not have the financial resources to pay for a clean stove and for the fuel or power to run it. Precious Ede, a professor of climatology at the Rivers State University in the Niger Delta region, says the income level of households in the country must be factored into any plan private investors and the government are bringing in to drive the net-zero target.

Some international actors are taking frontline roles. The Clean Cooking Alliance, a non-profit operating with the support of the United Nations Foundation to promote clean cooking technologies in low- and middle-income countries, is one of them. The alliance has initiated a series of programmes to improve access to clean energy in Nigeria, including research, funding for small- to medium-scale clean cooking businesses and behaviour change campaigns. It's no easy hack, and the clean cooking industry has not yet achieved the scale required to make significant impacts, according to the Clean Cooking Alliance. 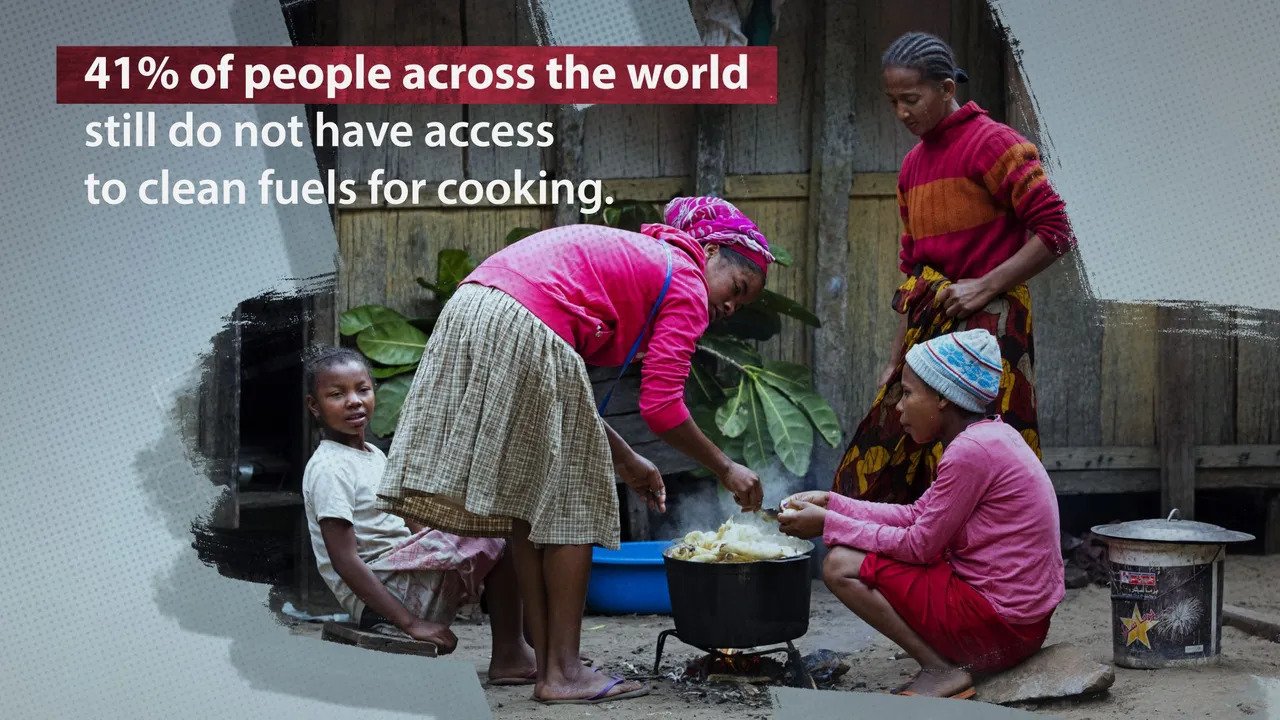 
Increasing access to clean cooking is also a gender issue, says Ikeazor. Women, more than men, are likely to suffer significantly from the adverse effect of using polluting charcoal and firewood due to social-cultural practices that primarily restrict them to roles in the kitchen, especially in Africa. So focusing on a women-centred approach to clean energy solutions can both accelerate access and save lives.

This means ensuring that the solutions being rolled out actually work for the women using them. In one project last year, a group of non-profit organisations distributed clean cooking solutions to women in 50 households in Mararaba-Burum village in the federal capital Abuja. As well as supporting these women, the project aimed to collect data on how effective different stoves were at reducing air pollution inside their homes. It tested five types of clean stoves, all based on either liquefied petroleum gas (LPG), fuel-efficient biomass or ethanol, by attaching wireless sensors onto the cookstoves to track how long and how often women cook. The data, downloaded via mobile devices or tablets, was used to quantify emissions reductions as well as get data on how cookstoves were actually being used.

It found that the more efficient biomass stoves were used the most. The liquid fuel stoves showed the lowest use over the long term, due to the expense of buying LPG and difficulty in sourcing ethanol in the region. However, households said they would be more willing to take out a loan to buy an LPG stove than a biomass one.

Encouraging such a switch from biomass to LPG could reduce cooking's CO2 emissions in Nigeria substantially. But in the longer run, an overreliance on fossil fuels – including LPG – brings its own problems. 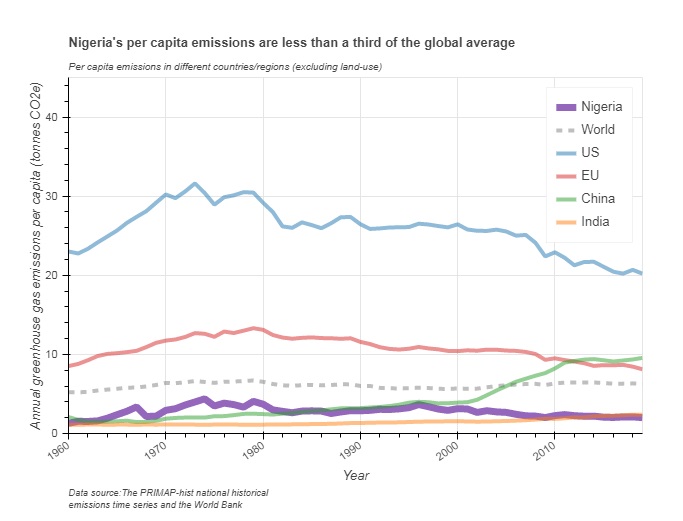 The Nigerian government is holding tight to natural gas as part of its decarbonisation drive, arguing that its abundant reserves should be explored to end energy poverty by 2030. 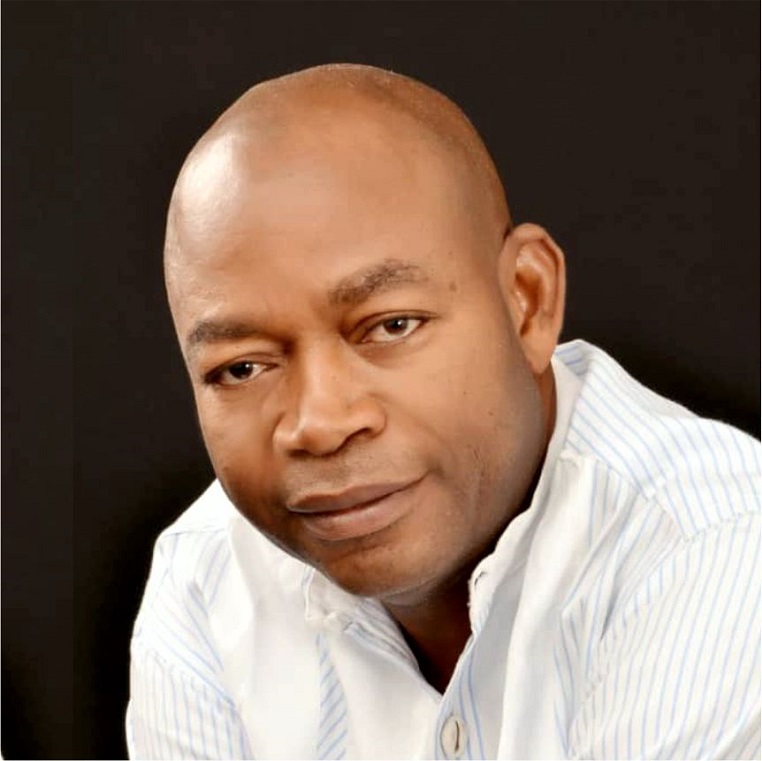 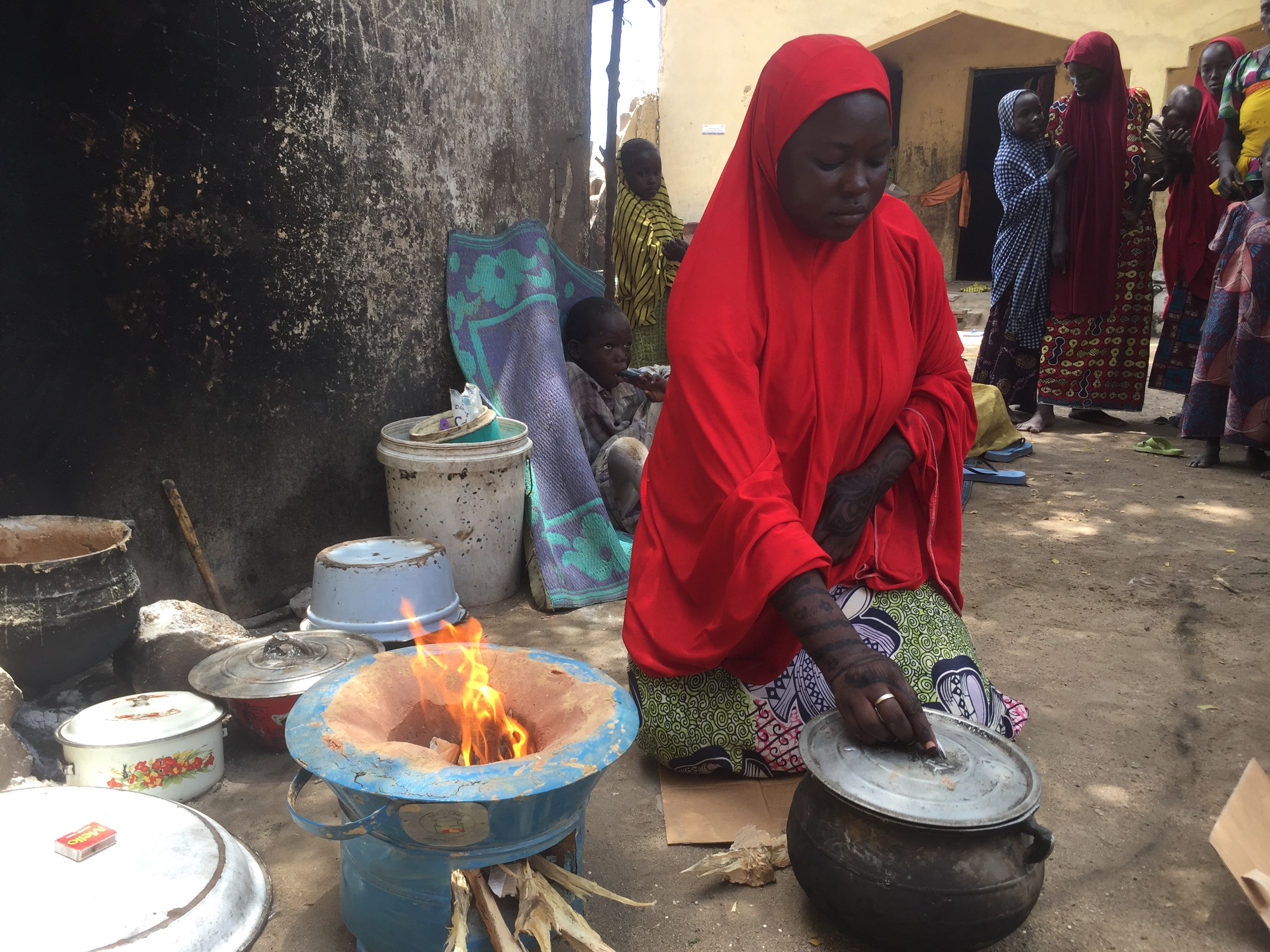 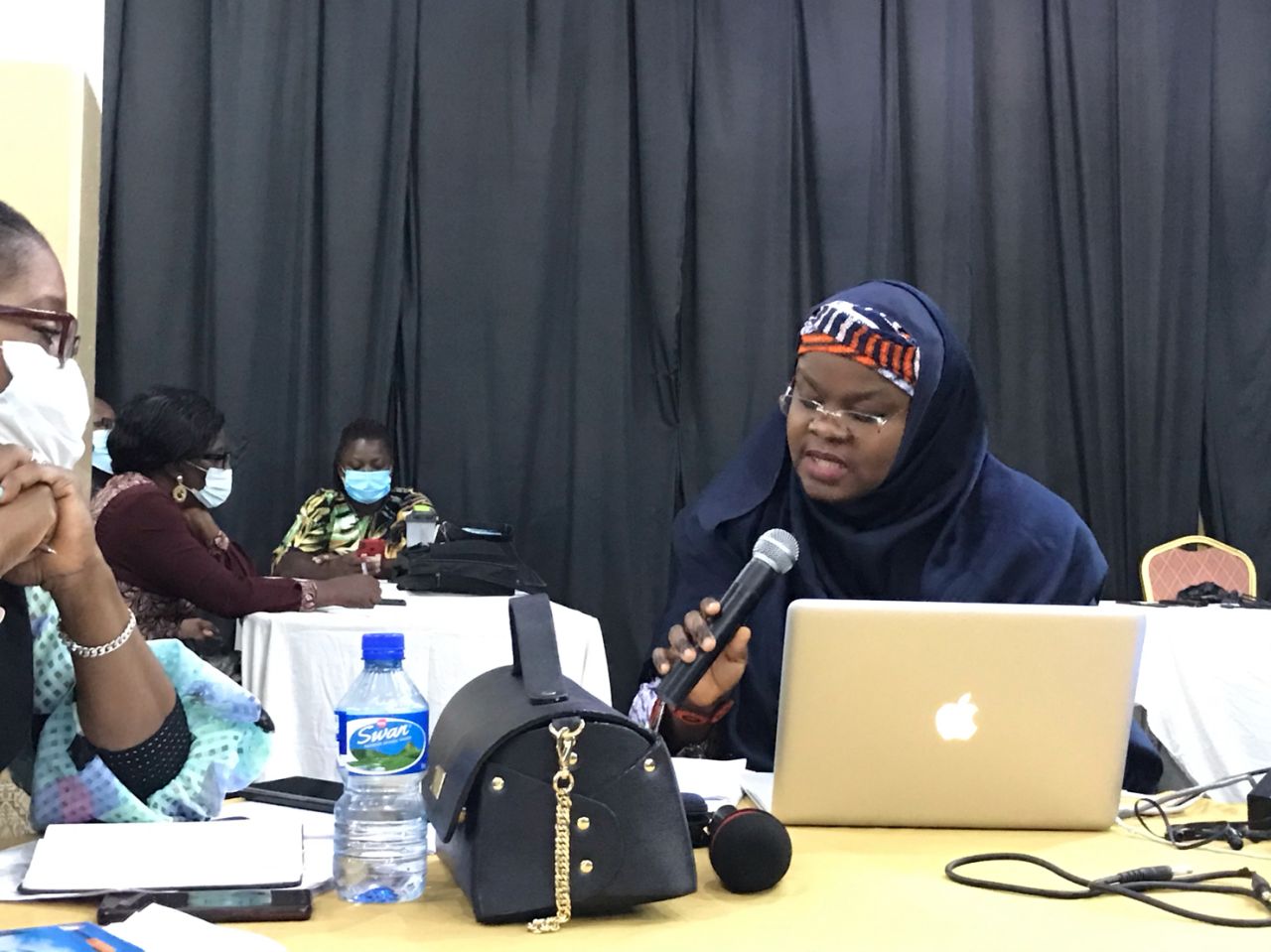 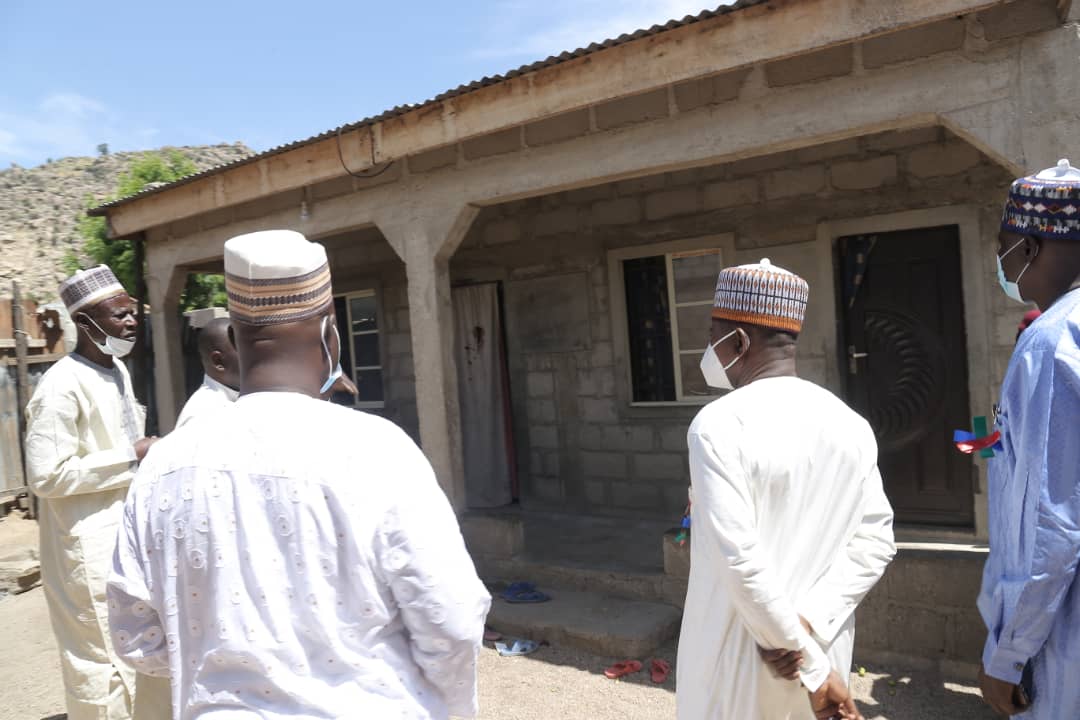